Chelation for Coronary Heart Disease: What You Need To Know

Heart disease is the leading cause of death among both men and women in the United States. Coronary heart disease is the most common type of heart disease and is responsible for more than 370,000 deaths each year. Treatments include lifestyle changes (such as following a heart-healthy diet and quitting smoking), medicines, and medical procedures such as angioplasty.

Chelation is a chemical process in which a substance is used to bind metals or minerals so they can be excreted from the body. Chelation has uses in conventional medicine, such as treating iron overload or severe lead poisoning. When it’s used as a complementary treatment for heart disease, a health care provider administers a solution of disodium EDTA in a series of infusions through the veins. A course of treatment can require 20 to 40 weekly infusions lasting several hours each. Patients also typically take high-dose pills of vitamins and minerals.

Just having a blood lead level that is “normal”, increases your chance of cancer 68%, increases your chance of early death from any cause by 46%, and death from cardiovascular disease 33%. Today it is imperative for anyone with high blood pressure, heart disease, prostate issues, cardiovascular disease, chronic fatigue, cancer or for preventative health measures to test for heavy metals. 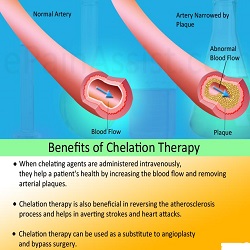 EDTA and the Cardiovascular Effect

EDTA chelation therapy is a method for removing heavy and toxic metals from the body. It has been well-established and accepted as   a standard medical procedure for over 50 years, and is approved by the FDA for the treatment of lead toxicity. Using EDTA chelation  therapy to treat degenerative diseases has met with extensive resistance from mainstream medicine. The reason for this is obvious to  most people. It is certainly not because of a lack of scientific proof of EDTA chelation therapy’s therapeutic success over the years. Medicine today is far too political and the mainstream medical system, unfortunately, is set up to try to make people well AFTER  they get sick.

There is little doubt that EDTA chelation works very well when offered as a treatment of last resort, especially for those with end stage peripheral vascular disease needing amputation. These patients in most cases get to the end stage of the disease because mainstream medical approaches fail so often and the patient is left in the end stage of the disease. EDTA chelation in these cases is still effective. While the precise mechanism of action for EDTA is not well understood, it has been under intensive medical debate over the years. Current scientific research has shown that EDTA chelation therapy has its cardiovascular effect primarily at the endothelium level and not simply a “rooter-router” mechanism so many once believed.

It is the end result of injury that started at the extremely thin layer of endothelial cells that line the inside surface of the heart and blood vessel walls. Heavy metal toxins such as lead, mercury, aluminum, cadmium, arsenic etc. has been clinically proven to damage and cause endothelial dysfunction. Numerous established studies have confirmed that an impaired endothelial function is linked to all major coronary heart diseases.

Chelation appears to restore the body’s ability to create the important substances, Nitric Oxide (N.O.), prostacyclin and heparin, by removing these metals from the endothelial lining.

One of these problem metals, mercury, is known to cause damage to enzymes so mercury removal should be beneficial. Removal of these metals appears to result in improved delivery of oxygen and nutrients to the tissues of the body. The theory of EDTA removing the solid sticky plaque with a unique mechanism, and dangerous solids being converted to a liquid, then transported away to be eliminated as a natural, normal phenomenon of body chemistry is still held by some. It does appear however that the discovery of N.O. production increasing with EDTA chelation is exactly what is happening, and that the excess plaque is removed through normal metabolic functions due to the body achieving a new level of homeostasis.

This affords a possible explanation for the beneficial effects of chelation. In addition, EDTA blocks the slow calcium currents in the arterial wall, resulting in arterial vasodilation.

In 1999, Dr. Valentin Fuster, M.D. published a Book called The Vulnerable Atherosclerotic Plaque. Dr. Fuster was at the time the President of The American Heart Association, and also was and still is the Chairman of the Department of Cardiology at Mount Sinai School of Medicine in New York City. This book shows that heart attacks do not occur in areas of maximal plaque buildup where calcium has hardened large deposits of cholesterol, but in fact occur in fresh, “vulnerable” plaques that get INFECTED with germs, such as Epstein Barr Virus, Herpes Virus, Cytomegalovirus, and other low level germs that infect humans. Researchers are now in the process of studying and proving that these germs are more prevalent and “infectious” when N.O. is not present in sufficient amounts.

Today it is imperative for anyone with high blood pressure, heart disease, prostate issues, cardiovascular disease, chronic fatigue, cancer or for preventative health measures to test for heavy metals.

Therefore, heavy metal toxicity leads to decreased amounts of Nitric Oxide, which leads to unrelaxed blood vessels and associated decreased blood flow, AS WELL as vulnerability to infection of fresh cholesterol by low grade virus, such as Herpes, that can form and break a vesicle within an artery and cause an immediate Hypercoagulable state, with a subsequent blood clot formation and sudden death.

Dr. Yoshiaki Omura has discovered how to use the leaves of a plant to remove heavy metals from the body.

Dr. Omura has a background in both clinical medicine and experimental physics. He’s Director of Medical Research at the Heart Disease Foundation in New York. And he’s an adjunct professor at New York Medical College.

Dr. Omura had discovered a way to increase the body’s ability to fight infection. At the same time, he had accidentally discovered an style="font-variant: normal;">inexpensive way to rid the body of toxic heavy metals.

A follow-up study involved a patient who had three mercury-based amalgam fillings removed. After the procedure, significant amounts of mercury were found in the patient’s lungs, kidneys, liver, and heart. Dr. Omura used the special leaves to remove the mercury. Within a few weeks, the metal was gone.

The chelator Dr. Omura used comes from the coriander plant. It’s known as Chinese parsley. You might know it as cilantro. And Dr. Omura isn’t the only one who’s had good results with it.